This weekend is an important weekend in the Swedish calendar. It’s the period of time centred upon the summer solstice, and more specifically the Northern European celebrations that accompany the actual solstice or take place on a day between June 19 and June 25 and the preceding evening.

More importantly though it’s a time for everyone to just let go, enjoy the sunshine and get together with friends and family for the tradition lunch which consists of pickled herring, egg, meatballs, hard bread and lots of schnapps. In the end there’s always strawberries. 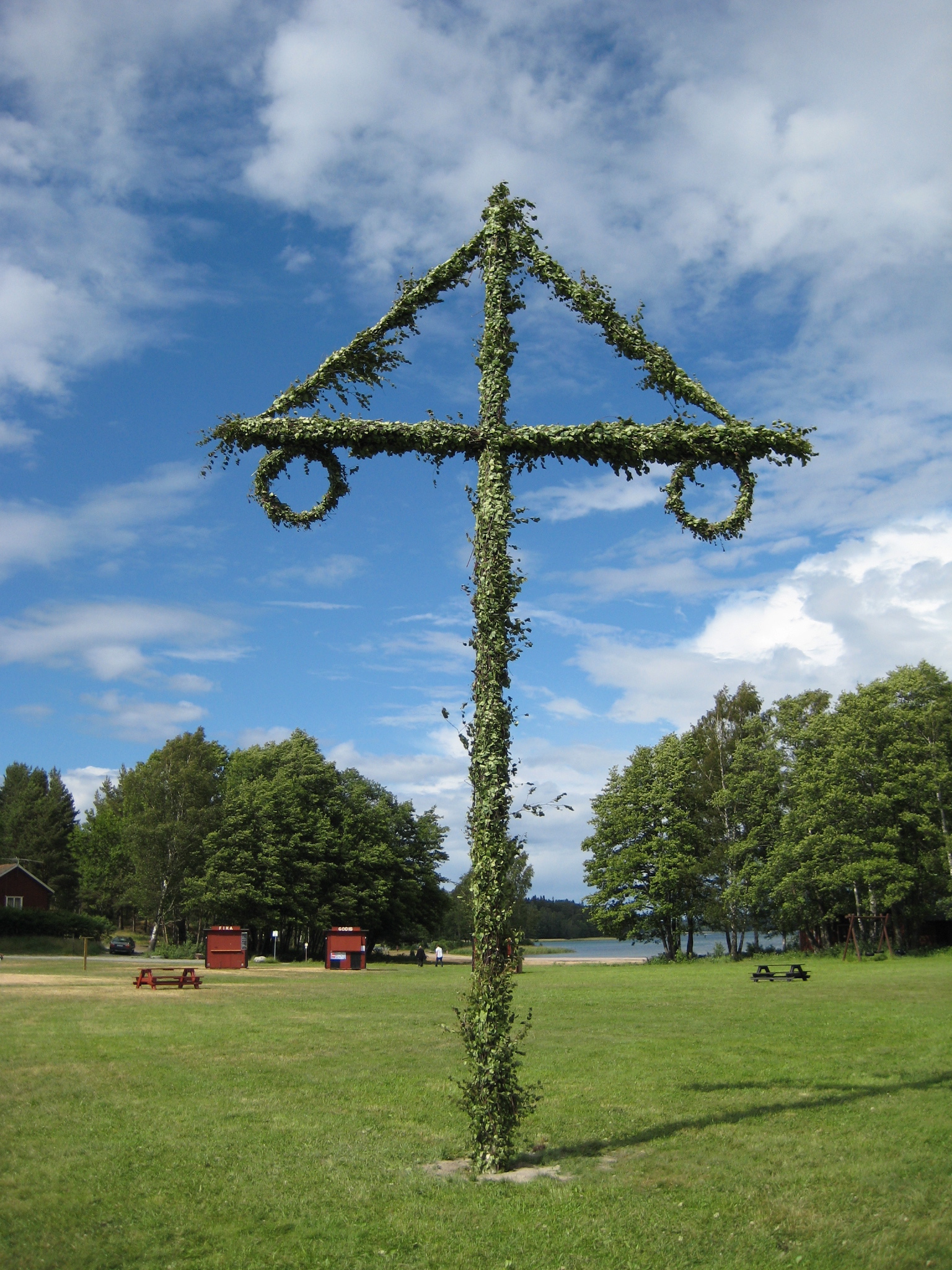 The other part of Midsummer consists of raising and dancing around a maypole. Greenery placed over houses and barns were supposed to bring good fortune and health to people and livestock. To decorate with greens, in Swedish was called “att maja” or “to may” in English and may be the origin of the word “majstång”, where maja originally comes from the month May, or vice versa. Today, however, it is most commonly called a “midsommarstång”, which literally translates to midsummer pole.

There’s also the pagan rites side to the Maypole and has a lot to do with Freyja and Freyr which has a phallic symbol. During the Viking age there were rituals centered around this, as a worshipping of fertility and a rich harvest.

So midsummer is a great time to visit Sweden. It’s when we’re at our happiest.

During this last week, Henrik and I went to Stockholm, to release five new beers at Bishop’s Arms in Södermalm. It was great to see so many familiar faces, and meet so many new faces. The beers we took with us was in Sally the Saler, Man goes crazy for peaches, Monkey Business, I (f*cking) made it and Beerbiblioteket, if that is your real name?

It was quite a variety, from Pilsner, to Berliner, to IPA and Pale Ale. Man goes crazy for peaches has also been packaged and has already been leaving the brewery in both bottles and kegs. So look out for it in a pub near you 🙂

In this last while we’ve been focussing a lot on our canning line, even though we still produce more beer in bottles and even more in kegs. One of the reasons for cans has been because of the environmental benefits if you compare cans to bottles. The same goes for kegs, when you compare metal kegs to the KeyKegs we use.

The KeyKeg company has a very big environmental focus. KeyKegs are lightweight and recyclable, because all the raw materials can be separated in just a few steps and used to make new KeyKegs. Probably the most important parts of KeyKegs are they they’re already made from 100% recycled plastic.

Fewer shipments are required, and empty kegs do not need to be returned, which is around a 65% saving on transport, which in the end affects the price of the beer.

From a design perspective they are very compact, which means that KeyKegs have a 25-30% higher loading capacity than steel kegs, which is great for the environment. Fewer shipments are required, and empty kegs do not need to be returned, which is around a 65% saving on transport, which in the end affects the price of the beer.

Using recyclable kegs also means we don’t need harsh chemicals for intensive cleaning, as you do with steel kegs.

So there’s a lot you can do if you’re an environmentally conscious beer drinker.

This last week we posted about our Berliner “A Passion for Gingers“, that we in error discontinued at the Swedish monopoly Systembolaget. We have rectified the error, and the beer will again be available from this coming Monday. Just in time to stock up for your summer vacation.

You can follow this link to order it to your closest store.

That is it from us for this week’s brewery update. We hope you’re enjoying the weekend, and stay safe if you’re on holiday or travelling.

Until next week. Cheers.

Compete in our freshest can in the land competition and stand a chance to win tickets to the All in Beer Festival.

A rare glimpse of a Hippopotamus drinking by his ...

You might have heard of The Cheops Pyramid. I have...

What do you store
inside your fridge door?
...

One of our favourite festivals is the All In Beer Fest. The reason? It’s just about beer.

We’ll be attending again this year, but if you’d like to attend, then there’s two ways to go about it. Buy a ticket, or enter our #FreshestCanInTheLand competition, where you stand the chance to win two entrance tickets.

Finding our beers in Sweden

Have a look at our Systembolaget page, where you’ll find a map that features the stores that have our beers on their shelves. If you live in other parts of Sweden, then you can follow this link to order the beers directly from Systembolaget.se to your closest store.

Visit our Folköl page if you’d like to find out which Stores & Supermarkets, such as ICA & Hemköp stock our low ABV or “folköl” across Sweden.

Li’l Pils, our unfiltered little Pilsner is available for takeaway at our brewery Tap Room this weekend. Stay for a tasting. Doors are open every Saturday 2-9PM. ...

Our Tap Room fridge is packed and ready. Doors ...

Our Tap Room fridge is packed and ready. Doors open as usual 14-21, every Saturday. See you soon. ...

Welcome to the first GSBF beer!

Welcome to the first GSBF beer!

A historic collaboration between @hopnotchbrewing (Stockholm), @hylliebryggeri (Malmö) and us @beerbliotek (Gothenburg). It will be available in cans and kegs.

A dry Pilsner with a good bitter bite. Easy to drink, with hints of citrus / grapefruit / mandarin in the taste and aroma.

The official premiere will be somewhere in the country on October 12th, and @systembolaget on October 13th and a place at the @greatswedishbeerfestival on October 23rd and 24th! Don’t forget to book your place.

If you are on the lookout for cool and casual late...

If you are on the lookout for cool and casual late night hideout spots in Gothenburg, Kyrkogatan 13 is the place to be! 🇸🇪

Here you will find @champagnebarenkyrkogatan13 🥂 @unityjazzclub 🍷 and @brunococktailbar 🍸 3 of our favourite places to go to after work.

Each venue brings its own unique, vibrant and fun twist to the food & drink scene
in Gothenburg. One of the many reasons why we love Kyrkogatan 13 is they have always bought local, supporting those around them, and have been independent from the very beginning.

We wrote all about why we love them and what is happening at Kyrkogatan 13, read their story here: beerbliotek.com/support-your-local-bars-kyrkogatan-13

Thank you for supporting local 💛 you’re not just doing a good job, but you also contribute to the beer culture developing and becoming stronger. 🍻

Our ‘Support Your Local Bar’ series focuses on Gothenburg bars and restaurants who have over the last 7 years supported us, bought our beer and made it possible for us to live our dream. Read their stories here: https://beerbliotek.com/blog/

🍻It’s time to enjoy another weekend at our ...

🍻It’s time to enjoy another weekend at our Tap Room 🍻

Today we have a special treat for you, Saison Cinq Episode Deux is pouring from our taps 🙌 One of the last sours brewed at our Sockerbruket Sour Brewery.

This Sour Saison was first released in July 2019. There is a lot going on with this beer, it is definitely one to sit down with and get to know.

Our Brewery Tap Room is open every Saturday 2-9PM.

Today we are welcoming our new Pils Pls can with ...

Today we are welcoming our new Pils Pls can with our updated branding into our Brewery Tap Room!

You can always find Pils Pls in amongst our weekly rotating Beer Menu at our Brewery Tap Room. Chill, sit back and pls enjoy this Pils.

Available to taste at our Brewery Tap Room every Saturday 2-9PM.

Pils Pls and our new Double IPA Satsumas for the boomers.

Launching this Saturday at our Brewery Tap Room! ...

Launching this Saturday at our Brewery Tap Room! 🍊 🍊 🍊

Satsumas for the boomers. 8,0% Double IPA.

A big and clean Double IPA with the addition of Mandarin. A great beer to share with friends. 🍻

We understand that back in your day a Mandarin could only be labelled a Mandarin, but things have changed. At Beerbliotek we choose to accept and love without labels.

A complex layered aroma of Citrus, mainly Mandarin with tones of Orange. The flavours are a blend of Citrus, Mandarin, Grapes and Honey, ending with a balanced bitterness.

Pouring for the first time at our Brewery Tap Room this Saturday 2-9 PM.

Available in Sweden 🇸🇪 at @systembolaget from 1 September.

Satsumas for the boomers. Double IPA.

Satsumas for the boomers. Double IPA.

A complex layered aroma of Citrus, mainly Mandarin with tones of Orange. The flavours are a blend of Citrus, Mandarin, Grapes and Honey, ending with a balanced bitterness. A great beer to share with friends.

Available in Sweden 🇸🇪 at @systembolaget from 1 September.

And at our Brewery Tap Room this coming weekend. Doors open as usual 2-9 PM.

Darryl is the Co-Founder & Designer. Head of Marketing & Export at Beerbliotek.

Any cookies that may not be particularly necessary for the website to function and is used specifically to collect user personal data via analytics, ads, other embedded contents are termed as non-necessary cookies. It is mandatory to procure user consent prior to running these cookies on your website.