08 Jun There was a storm brewing, we release a new Berliner Weisse and there’s really no need to spit – Weekly Brewery Update

Posted at 15:23h in Brewery Updates by Darryl De Necker

In this week’s, slightly delayed, brewery update, (due to a storm that was brewing over Amsterdam and we couldn’t get home), we reveal our latest Berliner Weisse, there’s news on a brand new IPA on the horizon, and you can now get your hands on some merchandise directly from our Tap Room. And in other news, according to the experts, you shouldn’t “spit” while tasting beers.

A Berliner Weisse with Coconut & Strawberries.

This is the ninth beer to form part of our Berliner Weisse range. It’s also the fourth we produced as a Folköl, or 3,5% low ABV beer, so that we can sell it directly from the brewery during summer. In Sweden our hands are pretty much tied when selling beer higher than 3,5%, as the state owned monopoly has the only licence to sell beer over 3,5%.

This version is one where we added Coconut and Strawberries into the mix, and will hit the markets in a week or so, so keep an eye out for it in your local stores, or pubs and restaurants off course.

The illustration is our traditional Maypole, which we dance around during Midsummer. On the label I’ve even included three emojis, which you will either understand, or you won’t. If you don’t, then Google is your friend, or even Wikipedia and YouTube 🙂

Midsummer weather can be just about anything in Sweden. This low ABV beer should match just about all of the eventualities. Except maybe the rain.

To be honest, I really love doing these illustrations. It is a challenge at times, as there’s not always a lot of time for preparations. One fruit can be replaced by another, or something else can be added, which means the illustration will have to change. But in the end, they need to be a lot of fun and especially colourful.

Beerista: There’s no need to spit. 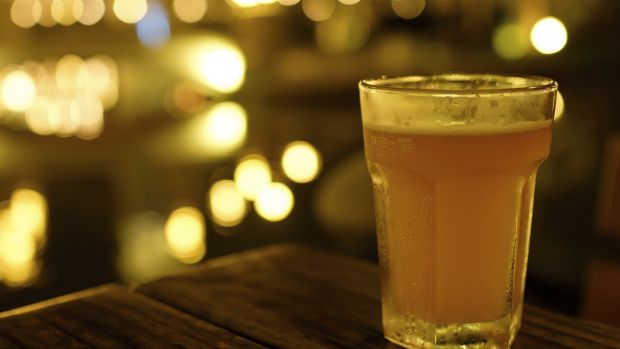 People sometimes ask if you should “spit” while tasting beers – you shouldn’t.

Having grown up In South Africa, and having lived in Cape Town (wine country) for a large part of it, you’re always surrounded by wine and discussions about wine. We were always at tasting, trying to find wine that was value for money. Since starting the brewery we’ve done some blind beer tastings, and honestly, beer tastings are by far tougher.
Certain wine varieties have a specific taste.

What is an IPA supposed to taste like? How many kinds of hops can you use to create an IPA? Here at our brewery we’ve now done over 40 different IPAs. Although you can guess it’s an IPA, you’re trying to establish more during a beer tasting. And it’s tough.

In this short article, Sorcha Hamilton, discusses why you shouldn’t spit out beer during a tasting. Makes sense. I mean who wants to waste beer?

We’ve now started stocking up on tees which is for sale directly from the Tap Room, and if we don’t have your colour or size on site, you can always buy it from our Web Shop. In total we have 15 different colours available, in both mens and ladies sizes.

If you’d like bigger sizes, then you can get in touch with us, and we’ll see about sorting you out. If you want to ship internationally, then get in touch too.

This week we will be packaging our latest, brand new IPA. It’s the one Jimmy is tasting in the photo. It’s hazy, and tastes a treat. More news on that next week. The only thing we can say about it is, “In the early days, there was no place for haze, but without delay, it became all the rage. No filters get used, no palates abused, a beer for all, not just colonial hipster dudes.”

This weekend our tap Room is also open again, so come by and have a beer. Bring your families, kids and even your dogs.

Until next week. Keep well.

Find our beers in Sweden.

Visit our Systembolaget page, to see the entire range. All of them can be bought can buy in-store at certain stores, or you can order them to your closest store via Systembolaget.se.

On our Folköl page you can see our entire assortment, as well as the Stores & Supermarkets, such as ICA & Hemköp that stock them across Sweden. When our Tap Room is open every second weekend, you can also come past to buy them directly from us. We always have a 4-pack or 6-pack available.

Find our beers in Internationally.

This afternoon we walked down the road from our ...

This afternoon we walked down the road from our brewery for the opening day of @hermanos_tacokiosk to support Niklas and his fun new TacoKiosk adventure! 🌮 And of course we dropped off some beer to add to their menu. We thought our little Pilsner, Li’l Pils, would pair nicely. 👌

Niklas has been a big part of the beerbliotek family and friends with us for a very long time. We wish him and the Hermanos TacoKiosk team the very best of success! We’re all excited to have a new lunch destination.

If you’re in or around Majorna, Gothenburg 🇸🇪 and in the mood for a ‘not entirely traditional’ tasty taco menu with some folköl, this is the new place to be.

We don’t know about you, but we’re ready for the snow to disappear and longing for warmer, sunny days to come 🌞

This is Riccardo, the newest member to grace the beerbliotek brewing team, brewing what is to be the latest beer in our single hop series, Single Hop Idaho 7! More will be revealed soon.

If you enjoy tasting single hop beers as much as we do, our Single Hop Mosaic is currently out in the world, and at @systembolaget , Sweden, right now.

Is the world getting you down?
We have a ...

Is the world getting you down?
We have a proposition.
Do the same as a funny clown,
put on a sunny disposition.

Sunny disposition, a 5,2% New England Session IPA. An ideal springtime beer for all of you hop heads looking for a fresh IPA. The first batch will be heading out the door in a few weeks. More news to come.

Hello world. Happy Shrove Tuesday, or as we say in...

Hello world. Happy Shrove Tuesday, or as we say in Sweden, Fettisdagen! Which is also known here as Semla Day.

Way back in 2018, when collaborations were a thing, our old local bakery @sanna_konditori__bageri experimented with our beer in these sweet buns, as can be seen in the video, and won the competition for “Gothenburg City’s best Semla”. Pretty sweet! 🤙

We loved testing their baked goods as much as they enjoyed baking with our beer. What’s your favourite recipe to make with beer? 🍻🧑‍🍳

For this year we recommend pairing your semla (or semlor) with our newest Porter, Follow me into the dark. Available @systembolaget 🇸🇪

If you’re not Swedish, and a bit confused as to what all the fuss is about, then here’s some Semla facts 👇
.
The name semla (plural, semlor) is a loan word from German Semmel, which was the name used for the finest quality wheat flour or semolina. The oldest version of the semla was a plain bread bun, eaten in a bowl of warm milk. In Swedish this is known as hetvägg, from Middle Low German hete Weggen (hot wedges).
.
Today, the Swedish semla consists of a cardamom-spiced wheat bun which has its top cut off, and is then filled with a mix of milk and almond paste, topped with whipped cream. The cut-off top serves as a lid and is dusted with powdered sugar. Today it is often eaten on its own, with coffee or tea. Some people still eat it in a bowl of hot milk. (Many bakeries distinguish between the two by decorating the traditional bun with almonds on top, whereas the jam-filled version has powdered sugar on top).

Our next Single Hop brew is on the way!

Our next Single Hop brew is on the way!

Idaho 7 is one of our favourite Hop varieties, so we decided to show off its peachy characters in this beer. Full bodied and fruity, this is going to be a luscious IPA. 👌

This is Axel, one of our Brewers, and Madison, one of our Marketing people, in the midst of filling some Red Wine and Bourbon barrels with one of our favourite dark beers we’ve done, Eternal Darkness.

More will be revealed soon on our recent Barrel Ageing project.

In the meantime, Sweden, if you want to have a taste of Eternal Darkness, an Imperial Stout, you can grab a can or two at @systembolaget to #supportyourlocalbrewery.

Hello Sweden! 🇸🇪 You can find our Folköl ...

Hello Sweden! 🇸🇪 You can find our Folköl range at Supermarkets all over Sweden.

Our brewers have brewed a new hazy Session IPA, an...

Our brewers have brewed a new hazy Session IPA, an ideal springtime beer for all of you hop heads looking for a fresh IPA.

If you liked our very first New England Session IPA, Fancy meeting you here, with @northbrewco, you’re going to love this one👌

Our staff are the reason Beerbliotek is what it ...

Our staff are the reason Beerbliotek is what it is. And what would a brewery be without it's fair share of interns helping out from time to time?

Introducing Linda Bengtström, who started as an intern with us mid-January, and will be here through to the summer.

She's studying Brewing Technique at Nynäshamn, and is one of the few Swedes who have earned the title of “Cicerone” after passing the @cicerone Certification Program last year. On top of that she's the Assistant Manager at @brewdoggoteborg. That's where she got to know us, and one of the reasons why she's here. Wish her luck!

We chat about Linda’s Craft Beer journey and reveal a sneak peak of a recent project on our blog. Follow the link in our bio. ...

Darryl is the Co-Founder & Designer. Head of Marketing & Export at Beerbliotek.

Any cookies that may not be particularly necessary for the website to function and is used specifically to collect user personal data via analytics, ads, other embedded contents are termed as non-necessary cookies. It is mandatory to procure user consent prior to running these cookies on your website.